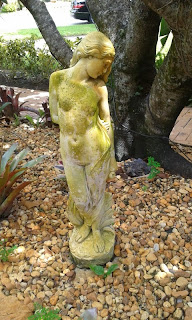 My parents had Mabel shipped back from Italy around 1969, with her pedestal.  My dad was flush then, and they took an annual European vacation.  Mabel's pedestal is with me, but Mabel is in Florida (above).  She has been there since my mother's death in 1986, when my brothers and I did not have the practical or emotional resources to deal with her.  (She is very heavy despite her lithe, albeit mossy, appearance.)

My Mom's sister Harriet, who died this past August at 95, had Mabel in her studio as a figure model.  When Harriet moved to assisted living, Mabel went to my cousin Paul's.  This photo is in his front yard.  Who in Brooklyn would put Mabel out like this?  It unnerves me to think of it.

It is likely that Mabel will return to NY. I hope so.