This summer has seemed intent on thwarting my needs and hopes for it, though it has delivered a lot of lessons about myself and is - I hope - poised to improve.

Last November I booked a flight to San Francisco for vacation; I would stay in the Berkeley area with Robert, my brother and friend.  The pressures of the interim months made it hard to envision any type of break.  Once the NURTUREart exhibit came through I saw it as a retreat:  to ponder the show and catalog, to spend time alone in the Marin landscape, and to play with my brother, who would be working much of my visit but also taking time off.  I wanted to sail and hike and meditate and be quiet, punctuated by good food and good talk with my brother.

Between November and my departure, Robert's son moved home and another brother announced that he and his family would be joining us for July 4 from LA, overlapping the last three days of my stay.  My vacation had morphed into a family vacation.  I have a great family, but everyone sane knows that "family" and "vacation" are a risky match.  It wasn't that I didn't want to see them, it's that I wanted to see myself.  Unfortunately, less of that happened than I planned and needed.

Waiting for a taxi at JFK on my way home, I learned that the Asiana crash occurred 30 minutes after I took off.

Once home, I greeted Grace then went to see Glenwood.  The two were separated, as Glenwood had been struggling with an infection.  She was paralyzed: stretched out on the floor, eyes wide open and staring, utterly still.  I was at the kitty ER within an hour.  Glenwood spent two nights in the hospital, came home, had 24 hours of good improvement, then declined.  She passed away July 11.  It will be a week tomorrow, and I am just coming out of the haze of shock, grief, and emotional exhaustion.

So while I didn't keep myself company as I imagined, I did get to see myself in old and new lights.  For the old, there was some anticipatory acting out about family; I got all anxious about my boundaries and having my needs go unmet.  It's stunning how fast the regression happens; it's utterly reflexive.  It's also reinforced because everyone regresses.  For the new, in having to deal with the neighbor who cared for my cats in my absence and witnessed the worst of all outcomes, I saw the kind of person I have become. 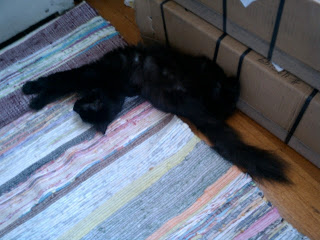