After my run this morning I went to the Brooklyn College fish and turtle pond to cool down.  It's my latest ritual, and makes running on the street when I can't get to the park more palatable.  It's peaceful and intimate.  This tiny baby turtle was sleeping on the back of another turtle, and a toddler-size turtle was hanging out on a lilypad.  They have no concept of body space, just march all over each other.  The ridges on their shells serve as footholds (flipperholds)?

By the time I got to the studio my anxiety was up.  After I worked through the procrastination and started, I saw how many more rules for these new works I'd made than I'd realized; they were stifling.  The initial works (most are in the posts below) had been really satisfying, and I was trying to sustain that; it backfired.  In the limited choices I was allowing myself, I'd stifled the work's becoming.  Seeing that was like the clouds parting.  I started taking each piece on its own terms, and the work is moving again.
No comments:

I'm battling this tightness.  Try as I might to forget the Memphis exhibit and just accustom myself to working again in a dedicated space, September is not far away and my time will tighten well before then.  I've made many of the small wood pieces and continue to be in love with them, but have been narrowing my options with them and, knowing that's not a good idea, trying to be expansive without abandoning them (to what, anyway?).  It's hard to put into words, and it's certainly hard to experience.  I have to get so frustrated in the studio that I do something/anything, and then I start to work in earnest.  It can take hours.  Right now the key is to get there every day, or as close to that as possible, to give myself less time to tighten up again.  I like to leave the studio when I still want to stay. 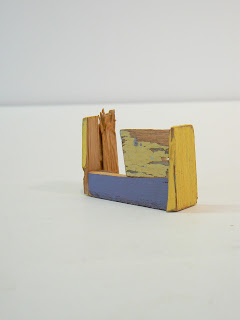 I'm settled into, and loving, my studio and between-semester studio practice, and again see how long, long, LONG it has been since I have been engaged this way, whether for reasons of time, space, or mindspace.  And now that I am, some fundamentals are changing and I'm working to process them as much as to make work.  It's exhilarating to be struggling for the right reasons.

A basic rhythm in my practice and work is the same but different.  Now there's a zooming out:  the context is expanding into a thematic shift and things have come out of focus.  The new space and time are catalysts; the Medicine Factory show in September is another.  The exhibit space is vast and active and a long-awaited chance to make site-based work.  Yet for now I'm trying to stay more focused on the internal changes than the exhibit.  I need to make some preliminary sense of them for new work to have a footing; I just know that focusing on the exhibit prematurely risks the semi-resolution of May 24, 2007.  I don't want that.

Five years later, processing the weaknesses of that piece is one of my starting points for figuring out how to move forward.  The relationships among the collage fragments were too arbitrary and illustrative; I couldn't resolve them (though I was trying; thank you, Susan) because I wasn't ready to see or explore the very basic tensions the work was alluding to but not confronting (and even avoiding).  Now, allowing myself to spend time in the studio writing, looking, and just thinking are starting to reveal those tensions.  They're familiar and new:  the same but different.

Realizing this shift is disorienting and anxious-making, and at first raised fear that I have to change everything to accommodate it.  That high-drama moment passed, thankfully, now replaced by a sense that it's the credibility and depth of the work that will change, and what that looks like in practice is simply unknown.